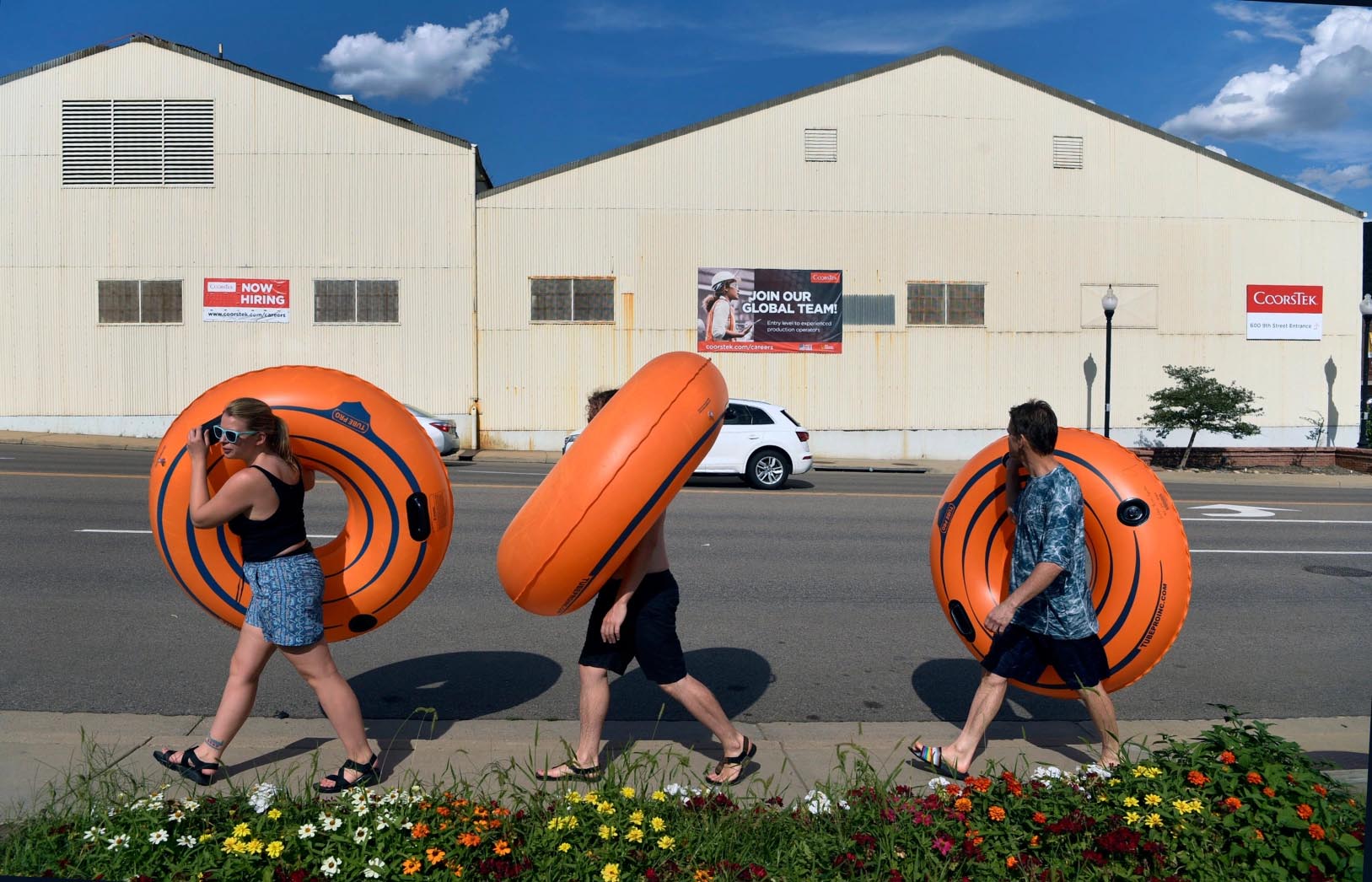 One of the largest redevelopment projects in Golden’s history is being undertaken by a family closely identified with the city.

CoorsTek, owned by the family that started what became Coors Brewing Co. in Golden, is going to transform its 112-year-old manufacturing plant on the north end of downtown into a mix of office, retail and residential uses. The roughly 1.3 million-square-foot project is expected to take 10-plus years to complete and will fill about five city blocks over 12.4 acres.

All or parts of the site’s oldest buildings will be incorporated into the project, which includes plans for apartments, a 150-room hotel and CoorsTek’s global headquarters. Crews have boarded up the windows, fenced off the site and are disassembling structures and removing the asbestos used during decades of construction.

On a recent walk around the property, Michael Coors, one of three family members who lead CoorsTek, said among the plant’s products were pottery, semiconductor parts, armor for soldiers and military vehicles, and equipment for energy production.

The plant also made labware, spark plugs and ceramic and metal components for various industrial uses.

Adolph Coors started the Golden Brewery in 1873 with Jacob Schueler. The Coors family still owns part of Molson Coors, formed in 2005 with the merger of Canadian-based Moslon and Coors. CoorsTek is wholly owned by the family.

Adolph Coors acquired Herold China and Pottery Co., renamed the Coors Porcelain Co. and eventually rebranded CoorsTek. It has 28 manufacturing sites across the world and is involved in scientific research and development.

CoorsTek employs about 1,200 people in Colorado. The last materials produced at the original plant were shipped in June.

Repurposing the site is exciting, Coors said. “It will be part of the next 100 years of our company’s history.”

The first phase of work will be the renovation of the plant’s first structure, a 1910 brick building, to house CoorsTek’s headquarters with a potential move-in date of late 2025. The space will be from 120,000 to 150,000 square feet and might include other tenants. The headquarters will account for roughly 15% of the office space with about another 650,000 square feet for yet-to-be-identified tenants.

“Members of the family thought it was important that the most historically significant buildings be preserved and be part of the future of CoorsTek,” said Dan Cohen, president of AC Development.

The Coors family started AC Development in 2020 to redevelop the industrial site. The company will be the project’s owner and operator. Michael Coors is on the board of directors.

The Golden City Council voted unanimously in June to rezone the property. The vote followed nearly two years of design, work with the city staff and public meetings and hearings, according to AC Development

After completion of the new CoorsTek headquarters, the next phase of construction will likely involve apartments, the hotel and possibly more office space, Cohen said. Plans include 350 to 400 apartments as well as retail and services such as restaurants.

“Everyone is struggling to get employees and certainly making it easier for people to live near work is going to make it easier to find those employees,” Cohen added.

The development company also committed to making 40% of the property open space. A series of public plazas and other spaces, including natural areas, are planned.

Another big change is integrating the spot into the city grid. Streets that now stop at the property’s edges will be part of the traffic flow.

All the work will likely cost between $600 million and $900 million, Coors said. “It’s a substantial project.”

The project has generated interest in the business community, Coors added.

“Golden has quite a bit of tourism,” Coors said. “We see ebbs and flows of people coming through. Having a little more activity is exciting to the business community.”

“This is going to be an economic driver for Golden and also a very exciting opportunity for that part of downtown, revitalizing it and making it a valued part of the community,” said Rick Muriby, the city’s community and economic development director.

The industrial property provides an opening for new development in the city of nearly 20,000. Most of the land nestled into the foothills and along Clear Creek has been built on.

“One of the challenges in a small city like Golden is that it’s already built out,” Muriby said. “We don’t really have greenfield development any more. We have redevelopment and a limited amount of infill development, but not a lot of vacant lots.”

The city staff worked with AC Development on the CoorsTek proposal for about a year before the public hearings began. The planning commission had five meetings on the plan and in May recommended that the city council approve it.

“We took a break in the middle to have a community outreach process so residents could kind of catch up with how complex this project is and all that’s in the proposal,” Muriby said.

“We spent a lot of time communicating the community’s goals around sustainability and around historic preservation, public art and housing affordability,” Muriby said. “There was a lot they were willing to cooperate with us on.”

Golden doesn’t currently require developers to include affordable housing. Muriby said the city has finished a draft assessment of housing needs and might establish requirements and an affordable-housing fund.

Parking was one point of disagreement. In exchange for reduced on-site parking, the developer said it would encourage the use of carpooling to offices and public transit. The staff proposed requiring more parking later in case the plan didn’t work, but the city council approved the project without the fallback.

The developer will have to monitor the parking, most of which will be underground. Housing will likely be built on a parking lot next to the plant.

AC Development bought four tracts of land on the north side of the plant. Cohen said the parcels won’t be part of the first phase of work, and tenants in businesses and a nonprofit organization haven’t been asked to leave.

Tim Hancock, whose house is to the north of the property and overlooks Colorado 58, told the developer that he didn’t want to sell when he was first approached roughly two years ago. “I’m 80 years old and I was going to spend the rest of my life here.”

But Hancock said he realized he eventually would be surrounded by construction if he stayed. He bought a condo in Arvada and has moved out of the house where he had lived since 1958. Hancock feels he was treated fairly, but said he’ll miss living in Golden.

Although much of the structure of the plant where manufacturing took place continuously for more than 100 years will be torn down, physical reminders will remain. Besides keeping all or parts of four of the oldest buildings, the developer will integrate bricks, kiln parts and ceramic items into the buildings. The objects could become part of the on-site public art.

“We’ll have the whole site tell the story. That’s the goal,” Coors said. “The last several years, we’ve been removing interesting components of what was inside and setting them aside.”

The development company wants to preserve the site’s history, Cohen said. “We’re going to find a variety of ways to make sure the history of the activities that have occurred on this site and the importance of this property in the broader city are told.”

While honoring CoorsTek’s legacy, Coors and Cohen expect the company’s ongoing work to spur interest in the site.

“We’re pretty proud of the heritage and history of this company. It’s been able to really innovate and find new products that are meaningful for the world for over 100 years and it’s still going strong,” Coors said. “We’ve been supporting the energy industry for the last 100 years and as the energy transition occurs, we’re seeing new opportunities for new products.”

The energy transition will be front and center at the redeveloped site. Trains used to roll up behind the plant and dump loads of coal to fuel the activity. The new and renovated buildings will be powered by solar energy and will use all electric appliances.

“With CoorsTek as an anchor tenant,” Cohen said, ” we think it’s going to attract other innovative companies in clean energy and that other industries are going to want to gather here.”